Hello,
My name is Cheyenne Little I’m a 14 year old horse crazy girl who is working towards fighting the reopening of equine slaughter houses in the United States of America. I’m asking that you sign my petition to help shut down the slaughter houses.  I attached the link to my petition below as well as some information on the subject.  And if you decide to sign, on my petition page you can click the “Share” button to tell your friends and family members about the cause via Facebook and email!  Please spread the word about my cause and tell everyone you can.  And be sure to leave a comment after you sign about the reason you signed.  Each reason helps encourage others to view, sign, and share.  So please check out the petition link and forward this message to as many people as possible.  Each signature brings us one step closer to ending the cruelty.  Your signature takes just a few seconds and helps us reach our goal of ending equine slaughter in the USA. Thanks for your support,
Cheyenne Little
***CLICK HERE TO SIGN THE PETITION!***
***CLICK HERE TO VIEW AND FOLLOW OUR BLOG***
***CLICK HERE TO SEND ME YOUR COMMENTS/STORIES & TO CONTACT ME***
-A Little More Information-
So you may be wondering, “Why should is it important that I sign this petition?” Well, here’s a few reasons-
1. It’s plain old cruel.
Imagine it. You’re taken away from your family, friends, and home. Loaded on a noisy, dark, truck and stand with dozens of other horses biting, kicking, and ramming into you that you cannot get away from for hours on end. When you’re unloaded you run into a small, overcrowded pen with no food or water for who knows how long. The ground is deep with manure. One by one the others begin to disappear. Your driven away from the herd, ran down a chute, drug into a small pen, before being shot, perhaps even multiple times. Your body is then drug to a pile of others and the next horse is driven into the rage of the gun.
2. Every horse has a purpose, slaughter is unnecessary.
Every horse is made to do something. It can be a companion, work as a therapy horse with disabled children, it can teach a child to ride, be a best friend, fly over fences, gallop over hills, swim through rivers, climb up mountains, race across the dessert, or simply even be a lawn mower or pasture ornament.
3. There are other solutions to the problem of overpopulation.
Why not donate your horse to a therapy center, sell it, give it away, put it to pasture, retire him, surrender him to a rescue center, or even put him down humanly in the comfort of his own home? Slaughter is not the answer to overpopulation. Nor is removing the unwanted horses. The answer is EDUCATING breeders before they produce more unwanted horses.
4. It’s not a hugely profitable industry.
Horse meat currently (2011) sells for around 75-80 cents per pound (US currency). That means a 1,100 lb horse brings in approximately $880. HOWEVER, like all types of meats just because the animal is 1100 lbs does not mean that’s all meat. There are bones, organs, water content, and more that need to be taken into account. So let’s split that price. That brings us to $440. Now we need to trim the fat. Let’s say it brings us to $400. What about cost of preparation, shipping, and gasoline to export it to other countries??? Maybe $150-$200? The slaughter house purchases the horse for around $75. Now were down to $75-$125 profit. That’s it! Each year approximately 25,000 horses were slaughtered in the US before it was made illegal in 2007. That means each year, providing each horse was of human consumption quality, the US would only make approximately $1,875,000-$3,125,000. Is it really worth it? The controversy, the deaths, the cruelty, and the pointed fingers?
So, what methods are used to slaughter them? Here’s just a few-

·        Jabbing in the back with a knife 9+ time until paralyzed but not dead
·        Using a captive bolt and shooting in the head
·        Bleeding out
·        Being beaten unconscious
Keep in mind none of these methods actually kills them, just causes them to become either paralyzed or unconscious until they can begin to butcher the animal.  During the first stages of butchering and gutting the animals is in fact still alive and able to FEEL EVERYTHING.

What is the process?
“In most countries where horses are slaughtered for food, they are processed in a similar fashion to cattle, i.e., in large-scale factory slaughterhouses (abattoirs). Unfortunately that results in a less than acceptable rate of effectiveness rendering the horses unconscious with a captive bolt gun, due to the difference between trying to get an accurate shot on an unrestrained horse vs. an unrestrained cow. In addition, horses' brains are set further back, so even when the shot is in the correct spot, it sometimes doesn't render them appropriately unconscious. In the UK a captive bolt is rarely used. They are usually killed using a free bullet from a bell gun. The skull is too hard to use a captive bolt the bell end to the gun prevents the bullet ricocheting and injuring the slaughterman. They are then killed by being exsanguinated ("bled out") by severing the jugular vein or carotid artery while suspended by the rear leg by a heavy chain shackle. Horse slaughter is similar to beef slaughter except for the fact that the overhead rail that the dressed horse carcasses ride on during process is two feet higher than a feedlot beef dressing line to suit the varying sizes of the carcasses. These are then butchered, cut into smaller pieces for easier handling. The residue may be rendered to make the fats usable.” (http://en.wikipedia.org/wiki/Horse_slaughter)

A Note:
Hopefully now you understand the importance of ending this abuse.  Once again, please forward this to as many people as you can! I don’t know about you, but I for one do not want to live in a country where this abuse is considered acceptable and humane.  So please sign the petition now by clicking on the link below.  Thanks so much,
Cheyenne Little
CLICK HERE TO SIGN THE PETITION!!! 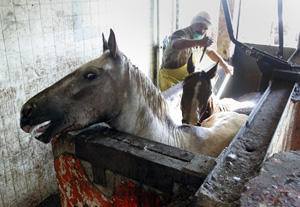 Tell me you can't see the fear in his eyes.